Tearing down the language barrier in healthcare

As a junior doctor, he was confronted with a clearly frail patient who could only speak Arabic.

“We couldn’t understand one another; it felt hopeless. Just then, an idea occurred to me,” says Linus Kullänger, now CEO of Care to Translate, one of the candidates for the eHealth Award 2020.

Linus Kullänger’s idea was simple: what if you could develop a digital tool, an app on a smartphone, that could handle situations like this – that could break down the language barrier between patients and health professionals?

He initiated a development project that led to a product, developed entirely by end users, nurses and doctors. The app was introduced in 2018, which is also when Linus started the start-up company Care to Translate, along with three co-founders. In two years it has attracted 80,000 users within the healthcare sector, predominantly through word of mouth. A total of 1.6 million translations have been provided so far. A major advantage offered by the tool is that it can be used 24 hours a day, whenever the need arises.

“Human interpreters are rare in healthcare. For example, there is never an interpreter in the ambulance or at the reception in an A&E department and almost never during emergency visits to health centres,” comments Linus.

“There is no easy access to an interpreter if you are hospitalised either. The same is true within the elderly care field.”

It is the case that relatives can sometimes act as an interpreter, but this has its drawbacks: there can be linguistic misunderstandings, for example, and patients do not always want a relative to know everything about their illness or condition.

“It’s about both the patient’s privacy and safety. He or she has to understand what is happening and have a say in the care they receive,” says Linus. 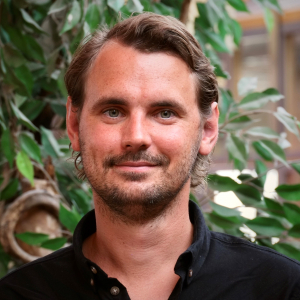 “But health professionals also have to be able to do their job properly and effectively. For example, you need to know the background of the illness and be able to follow up with the patient all the time.”

He emphasises the positive consequences of breaking down the language barrier: fewer misdiagnoses, fewer complications. More effective care at a lower cost. The response from users and patients has been very encouraging.

“Our surveys show that the tool works brilliantly, both groups are very pleased to be able to communicate with one another.”

The app, which is constantly being developed, currently offers 25 languages.

“We are not yet able to offer a completely smooth conversation, but we do use a thousand verified and attested phrases,” explains Linus.

“Phrases such as ‘Where does it hurt?’, ‘Are you pregnant?’, ‘Can you lie on your other side?’ are already included in the app.”

Care to Translate has applied for the eHealth Award for one simple reason:

“Winning the eHealth Award would mean a lot to us. Our focus at present is on developing the product, in dialogue with our users, but we would also like to reach out to decision-makers, in order to implement it widely in the healthcare sector.

“We also feel that it is important to highlight the problem and to talk about language barriers in healthcare. The eHealth Award and the attention it brings would go a long way to achieving that. We want to show that we are a part of the future vision for eHealth.”

eHealth Award: open for all Nordic startups
The eHealth Award is a collaboration between Vitalis, Health Tech Nordic, Sahlgrenska Science Park and Cerner. 2020 the award is open to applicants from all Nordic countries that have an innovative eHealth solution or product.

The winner will be presented 5 May 2020, at the opening ceremony of Vitalis. The registration is open to 2 April 2020. Find out more here >>

Mail has been sent. Check your email for the reset password link. It can take up to 30 minutes before you receive the email.

Your account has been created. You can now begin to favorise.

As logged in, you get the opportunity to favor, for example, program items, exhibitors, etc. Create your own fair with exactly what you are interested in. My pages also contain your purchases, such as tickets. An account is also completely free.